As many around the nation and the world prepare to celebrate the 155 Anniversary of Juneteenth, also known as Emancipation Day, hereâs what you should know about the important date in history.

Juneteenth is a celebration of June 19, 1865.Â  On that day, Major General Gordon Granger informed slaves in Galveston, Texas that slavery had ended by reading the following General Order Number 3 which reads in part – âThe people of Texas are informed that in accordance with a Proclamation from the Executive of the United States, all slaves are free.Â  This involves an absolute equality of rights and rights of property between former masters and slaves, and the connection heretofore existing between them becomes that between employer and hired laborer.â Â This occurred over two years after Abraham Lincoln outlawed slavery with the Emancipation Proclamation.Â  The news, which effectively ended their enslavement, ignited a slew of celebrations.

While there arenât any official Juneteenth songs, as the celebrations grew so did the adopting of so-called âFreedom Songsâ or spirituals that are largely connected to the civil right movement.Â  Standout songs like âLift Every Voice and Sing,â Swing Low, Sweet Chariot,â and âThis Little Light Of Mineâ also figured prominently in Juneteenth gatherings over the decades.

The family gatherings and cookouts that mark most nationally recognized holidays are also a strong centerpiece of Juneteenth, Community centers and churches also host events where readings of the Proclamation will take place, along with historical enactments and the like.Â  At these same events, the Freedom Songs will also hold some prominence in reflecting on the trials of those who were liberated from slavery that day.

On June 19, 2018, the Reedy Chapel AME Church (originally known as the Colored Church) celebrated Juneteenth and recognized the Chapelâs historical role as the location of the first documented celebration of emancipation that took place in Galveston, Texas following the announcement of freedom.Â  The event began with a reenactment of the march from the Old Galveston Court House to Reedy Chapel, followed by a program that included music, lectures, discussions, and fellowship.Â  Traditional Juneteenth refreshments were served.Â  According to Dr. Ronald Myers, head of the National Juneteenth Observance Foundation, red, which symbolizes perseverance, is traditional for Juneteenth:Â  Strawberry soda, red velvet cake, strawberries, red beans and rice and watermelon.Â  âWatermelon and red soda water are the oldest traditional foods on Juneteenth.â

Thank you to our FrontLine Worker

Please print the flier and add your Church Name and place in your car windows, house windows, doors, etc.

Reopening and Returning to the Church Building Info

AME Reopening and Returning to the ChurchÂ  Building

RESPONSE TO THE PRESIDENT’S PRESS CONFERENCE 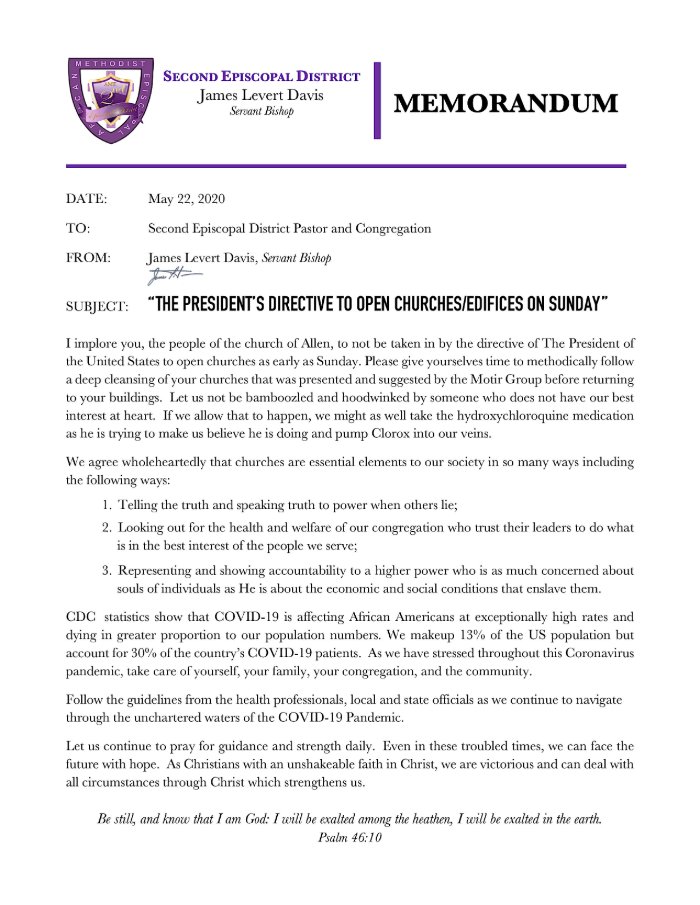 24 Questions Your Church Should Answer Before People Return

Please receive the following information shared by Bishop James L. Davis. The information was shared with his office, which may be of interest to you or someone you know. Click on the link below.

24 Questions Your Church Should Answer Before People Return

Ministering to the Wounded Healers 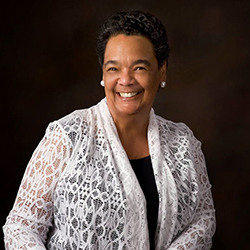 Please check out our calendar
for upcoming events...

Continue to Pray for One Another

May God bless us with the true spirit of Christianity, that we may live together, not as man over man, but as lay persons working with God.
Amen.